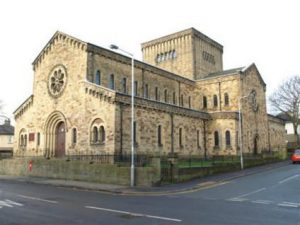 During Lent, Stations of the Cross will take place on Thursday at 7.30 pm after Mass. 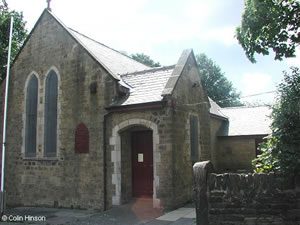 St Joseph’s is a remarkable 1930s essay in the Norman style, impressive in its scale, completeness and reference to the decorative piers at Durham Cathedral and elsewhere. Godfrey Clarke, the architect, a local man trained with several London firms before returning to Yorkshire. He favoured the Romanesque style for churches, that at Hoyland, near Barnsley (Italian Romanesque in style) being a good example, but St Joseph’s stands alone in scale and attention to detail.

Land for a school at Ingrow was bought in 1913 but the First World War delayed any building. The school opened in 1922 at a cost of £14,000, more than double the pre- war estimate, no doubt delaying the building of the permanent church. The first Mass was said in the school chapel on 22 November 1926. Land for the building of St Joseph’s church was given in 1929 by a Mrs Mahony and the church was opened on 17 July 1934, against some local opposition. The parish was created in 1942. Although not mentioned in Pevsner’s Buildings of England volume on the West Riding, Arthur Mee’s ‘Yorkshire’ describes St Joseph’s as ‘a striking Roman Catholic church built in the Norman style. Shaped like a Cross with a massive central tower, its walls are a motley of golden tinted stone and the light streams through over one hundred windows.’ Canon Russell of St Anne’s Keighley is believed to have strongly influenced the choice of the Norman style and travelled widely in northern England in search of exemplars. The church was re-ordered in 1970-71 by Bartlett & Purnell.

The church has the altar facing northwest but in this section all references will be to conventional orientation, i.e. as if the church faced east.

St Joseph’s church is one of those oddities, a 1930s building completely eschewing the spirit of the time but with such enthusiasm and attention to detail that the effect is indeed ‘striking’, as Arthur Mee said. It is built of coursed local stone with plain parapets concealing shallow-pitched roofs. The parapets generally have plain corbels but the tower, transepts and west front are more grandly treated with machicolation. The church is cruciform with aisles, ambulatory and small projections in the western re-entrant angles between the transepts and aisles. The west front has much plain stonework relieved by the decorative elements, the machicolation of the pitches of the aisle and main roofs, the west doorway with four orders of mouldings, with small windows either side and a wheel window above. The aisles are terminated by paired round-arched windows within a single blind arch. Nave aisles and clerestory have simple round-arched windows with chamfered surrounds, four each to the aisles and ten to the clerestory. Similar windows elsewhere. The north transept has a circular window with cusped surround whilst the circular south transept window has plate tracery of a circle surrounded by eight smaller circles. The four-square tower has windows set within five-bay arcades. The east end of the church is the one area where there is a 20th century feel in the almost nautical effect in the build up of round ended sanctuary and clerestory embraced by lower forward projecting chapels. These all have plain parapets.

The interior is still more impressive in its consistency, more so than any genuine Norman building, all in exposed stone. All arches are round-headed. Broad crossing arches with half-round responds and big plain capitals. Five-bay nave arcades on similar stout piers with plain capitals and moulded arches. Plain chamfered splays to the clerestory windows. The aisles have plaster groin vaults. Internal stone west porch and pedestal stone Holy Water stoups on either side. Fine timber roof in panels with moulded timbers and shallow arched trusses on stone corbels. Off the west side of the north transept the confessionals and off the west side of the south transept the circular baptistery with stone rib vault, circular font with lattice-work around the bowl and facetted carved wooden War Memorial of a more Renaissance character, made from the former pulpit removed during the re-ordering of 1970-71.

The tour de force of the interior is the sanctuary and ambulatory. The sanctuary is in three levels; at the lower level a continuous arcade, each pier with bold incised decoration inspired by Norman examples at Durham Cathedral and elsewhere. All the capitals are different too. Two orders of chevron around the arches. Triforium with intersecting arches on cushion capitals, again forming a continuous arcade. The arches embellished with chevron in sunk panels. Clerestory windows above, arranged in pairs. The sanctuary is raised up steps, with a low blind arcade to either side, and at a considerably higher level than the ambulatory. Mosaic floor, altered for the re- ordering in 1970-71. Altar in Ancaster stone, with round-arched panels, and a mensa of Ashburton marble, 1970-71. The tabernacle (by the Art Metal Guild of Clerkenwell, London) and the tabernacle throne (of Ancaster stone and Ashburton marble), also date from 1970-71. The old communion rail gates were incorporated within two lecterns. North and south chapel separated from the ambulatory by walls surmounted by arcades on clusters of columns (as many as six where the walls are thicker on the curve), adding to the spatial ambiguity of the east end of the building. These arcades continue in the ambulatory as a continuous blind arcade into which the small windows are set. Fine timber roofs. The chapels have stone altars, reredos and canopied niches enclosing life-size statues. Freestanding organ in the south transept, of 1974 by Laycock & Bannister. Plain but appropriate joinery throughout.